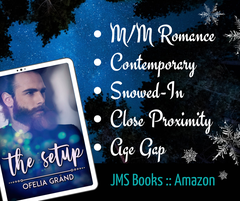 I’m delighted to turn the floor over to Ofelia Grand who also has a new release out today! Congratulations, Ofelia! I was lucky enough to be an ARC reader for The Setup and it’s an absolute delight.

The Setup by Ofelia Gränd

Three years ago, Dax Howard got out of a bad relationship and swore never to date again. He loves his picturesque cabin outside Nortown and is looking forward to three weeks of quiet over the holidays. He hadn’t foreseen a stranger turning in on his driveway in the middle of a snowstorm, claiming he’s there for a date.

Ellis Rush has risked his neck driving in a snowstorm to meet his friend Daniel and his boyfriend Dom for a double date he agreed to go on as a favor. Reaching the destination, he can’t see Daniel’s car anywhere, and when the mountain of a man opening the door says he’s never agreed to go on a double date, Ellis realizes he’s been played.

The more Ellis explains the situation, the more annoyed Dax gets. Dom is one of his closest friends, and he does not appreciate the setup, no matter how intrigued he is by Ellis. Since the roads are undrivable, Dax invites Ellis to stay, and together they plot their revenge. Cooking for Ellis, kissing Ellis, and sleeping next to Ellis isn’t the same thing as dating, is it?

Judging by the background noise, Daniel sat close to a TV. Anger sparked in Ellis’s mind, and he turned to look at Dax, who was watching him. He pointed at the phone and then drew his finger over his throat, telling Dax he was gonna kill Daniel. Since Dax was a mind-reading alien, he understood perfectly and nodded. Or Ellis hoped he understood.

“I’m calling from Mountain Valley Hospital. Is this Daniel Fletcher?”

Daniel was quiet for a few seconds, and Ellis almost felt bad.

“Yes, this is Daniel Fletcher.”

“Ellis Rush has been admitted, and you’re his emergency contact. He’s in surgery at the moment, but we’re doing everything we can to save him.”

“What … what happened?” Daniel’s voice shook, and Ellis winced. Dax nodded at him, though.

“Car accident. It took some time before anyone could get to him in this weather –”

“Bad enough for him to unfriend you, fucker! How could you send me out into the woods in this weather? I could have died.” Ellis should feel bad for scaring Daniel, but he didn’t. He was angry now. Daniel was watching TV while he was risking his life in a freaking snowstorm.

Daniel sighed. “I know, I know, but did you make it there?”

Did he make it there? It should be obvious to Daniel he wasn’t there. He gestured at the phone and rolled his eyes at Dax. “I’m stranded, Daniel. The snow is too deep to drive in.”

“Yes, but did you make it to the address I gave you? Is it his phone you’re calling from?”

The fucker. This was a setup. He gave Dax a narrowed-eyed look. He didn’t think Dax was in on it if it was a setup. “No, I didn’t make it to the address you gave me.”

Dax raised his eyebrows in question, and Ellis waved at him to be quiet. He wasn’t showing any signs of wanting to speak, but better make it clear words weren’t welcome right now.

“I’m at this old ogre’s place, and I swear he has children in the basement. He has that look, you know? As if he keeps a harem of little girls locked up somewhere.”

“Sociopath eyes, but at least he allowed me to borrow his phone. I think his wife is dead. She’s sitting in an armchair in front of the TV, but she looks stuffed. No movements, I don’t think she’s breathing.” He lowered his voice to a whisper. “There are a lot of creepy animals mounted on the walls. I think he’s into taxidermy, and maybe … I think he’s done his wife.”

There was a rustle on the other end, and he could picture Daniel pinch the bridge of his nose. He often did when things didn’t play out the way he’d planned.

“Are you being pissy?”

“Yes, but what if he kills me before the tow truck can get here?” Ellis leaned against the counter and watched Dax as he put a plate, a glass, and cutlery on the table. For someone as big as he was, he sure could move soundlessly. He was older than Ellis, but he might have misjudged his age a little. Now, when he was relaxed, he looked younger. He’d guess past forty, but early forties instead of late, as he’d assumed when they’d been outside.

He was one fine specimen — broad shoulders, large hands, and when he smiled, Ellis’s gut tightened.

“What?” This time Dax smiled for real, and Ellis’s blood rushed through his veins, making heat pool both here and there.

“Have you called a tow truck?”

“Of course, I have! How do you suggest I get home otherwise?”

Daniel groaned. “This was not how it was supposed to go.”

“I’m sorry! Demond said it had to be now when the weather was bad or Dax never would’ve let you over the threshold.”

Ellis froze. He was in the right place? But Daniel wasn’t here.

I’ve been lucky enough to read not just one ARC or pre-release this week, but three! And they have all been wonderful reads.

I am hooked on the sly humour with which the continuing story is told, from Hidden to Frills to Big Boy Pants. Bryan’s reaction to his unexpected journey of discovery is note-perfect as his trepidation and surprise are overcome by uncontrollable desire and he slowly realises that he might be ‘a little bit gay.’ This is another perfectly polished gem in an outstanding series. Can’t wait for the next one!

Holly Day’s delightful short story Dear Diary will be released on September 17th and is currently on a pre-release/new release 20% sale at JMS Books until September 23rd.  In this sweet and moving story, the diary format worked perfectly to show the mindset of the diarist, who suffers from anxiety and depression, further triggered by a romantic breakup. The ups and downs of his progress are charted in the tone of his entries and especially by the presence of lovely Lars. This was so heartwarming, rooted in reality but also wonderfully romantic. Such an engaging read.

The final story in this fab trio is Terribly Tristan by Lisa Henry and Sarah Honey, the third and final story in their wonderfully funny Bad Boyfriends Inc. series, set in Sydney’s student district. Terribly Tristan is now on pre-release and will be out on October 18th. The first two books in the series Awfully Ambrose and Horribly Harry are now available on KU and are highly recommended for anyone in need of a giggle!

His meeting with Leo made me cry with laughter and I was giggling all the way through this delightful tale as Tristan realises that after working his way through the hot male population of Sydney while not remembering anyone’s name, he might decide not only to be a proper boyfriend to Leo but a good one too.

It was lovely to be back in the shared house with Tristan and coupled-up Harry and Jack, and a treat to have a heart-melting cameo from Ambrose and Liam. This was such a heartwarming story and the perfect finale to this terrific and very funny series.